Google has now started removing the descriptive labels from the Bottom bar of the Gmail app. If you remember last year, the tech giant made the Gmail to receive a Material You redesign. And the result of that action was that the bottom bar became shrank. And most probably due to this reason the tech giant has already started taking steps further.

Since from the launch, huge majority of android users had various labels underneath the bottom bar icons such as “Mail”,” Chat”,” Spaces”, as well as “Meet”. Few of the users had the kind of app which is without any text. And the thing is that this design is now rolling out widely. 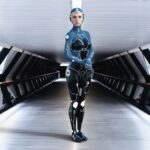